Jesus prophesied several times that he would die and be raised by the Father back to life. Peter rebuked Jesus for this prophecy, and Jesus silenced the dragon who was speaking through his friend to tempt him towards another path to glory (Matthew 16:21-23).

Peter eventually witnessed Jesus risen from the dead. Jesus forgave Peter for rejecting and denying him (John 21:17). Peter himself testified that, through Jesus’ resurrection, we are new creations with a living hope in an eternal life inheritance waiting for us in the next age (1 Peter 1:3-4).

Jesus appeared to John as the First and the Last and the Living One who holds the keys of Death and Hades, the spirit realm where souls rest until Judgement Day (Revelation 1:17-18). Our Father’s plan has always been to glorify his Son through resurrection (Isaiah 53:10-12).

In the master art, the sky is dark right before the dawn, and a disciple stands in the doorway confused about Mary’s report of Jesus’ resurrection. Peter and John race each other down the path towards the tomb after hearing Mary’s testimony. The tomb is open with angels sitting upon the burial stone with Jesus’ head cloth folded in the middle illustrating how Yahweh has now made Jesus Head of the Church.

The burial cloths are cascading out of the tomb in a flowing river of resurrection life illustrating their shared joy at his victory over the grave. The fruitful tree and flowers illustrate Mary’s assumption that the man behind her was the graveyard gardener. Jesus’ hands are raised with the Holy Spirit resting upon him illustrating their triumph over death.

Our Father’s all-consuming fire hand is wrapped around the cross as a sword driven through the dragon’s eyes illustrating Yahweh’s complete and total defeat of Satan’s blind attempts to prevent our Messiah’s salvation of mankind. A rainbow rises from the tomb foreshadowing Jesus’ ascension to Heaven.

Jesus embraces his Father with the Holy Spirit, a glorious divine reunion, surrounded by cherubim and seraphim angels. On the throne is a crown, the authority of heaven and earth, that Yahweh will give to his Son making Jesus King over all kings and kingdoms and Holy Prince of Perfect Peace.

Sketch #1: Empty tomb – This sketch is the story logo. This story is about Jesus’ disciples discovering that his burial tomb was empty on the third morning after his death.

Sketch #2: Running man – This sketch illustrates the first part of the story where Mary ran to tell Peter and John about the empty tomb, and they ran to investigate the evidence.

Sketch #3: Crying woman – This sketch illustrates the second part of the story where Mary stays in the garden confused and crying. Two angels reveal themselves and speak with her.

Sketch #4: Risen Christ – This sketch illustrates the third part of the story where Jesus reveals himself to Mary. She is overjoyed and returns to the other disciples testifying about him.

Let’s make disciples of all nations until there’s #NoPlaceLeft 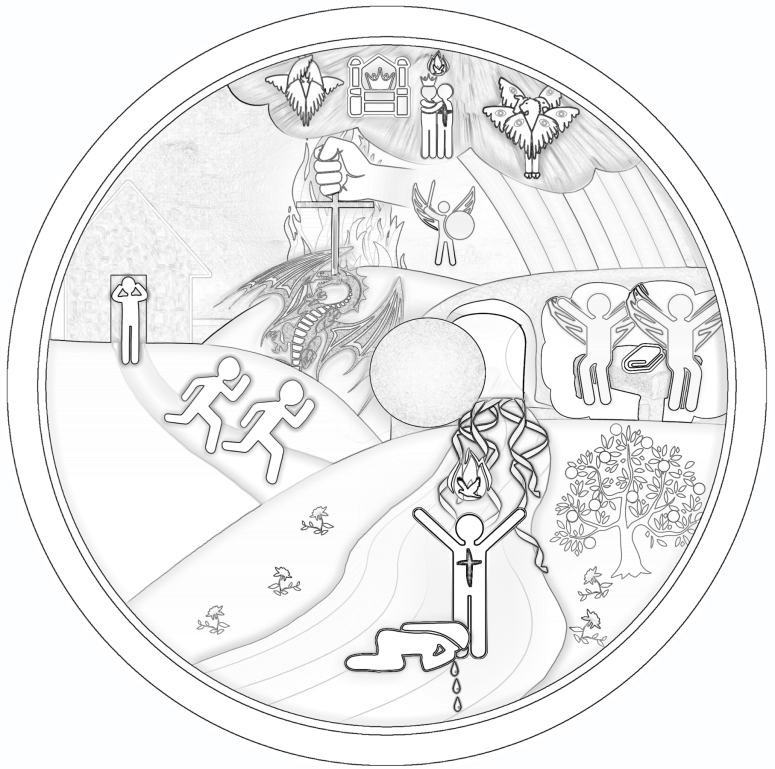